The basis of visual information is light reflected from objects. These signals enter the eye, are turned around (upside down) and then fall on the back of the eye. This area is called the retina, and contains receptors that are sensitive to light. There are about 260 million photoreceptors on the retina. These photoreceptors contain photopigments that break apart when light falls on them. This creates an electrically charged current, and signal transmission between neurons can occur. In the center of the retina is the fovea, this is where the signals coming from the center of your visual field fall. On the fovea there are a lot of photoreceptors, so the center of your visual field is also where you can see the most details.

There are two types of photoreceptors, rods and cones:

Behind the photoreceptors lie ganglion cells, which ensure that signals are projected to the brain. We distinguish two different types of ganglion cells:

All cells of the visual system have a receptive field. This is a concept that is difficult for some people to understand, because it is not part of the cell. We describe the receptive field of a cell as the place in the visual space where light must be to make a particular cell active. You can also represent that in another way, as a place on the retina. Then the receptive field is the part of the retina where light must fall in order to activate the cell further down the brain.

The axons of ganglion cells send signals to the brain. These axons pass through three structures before they reach the brain and can form synapses: 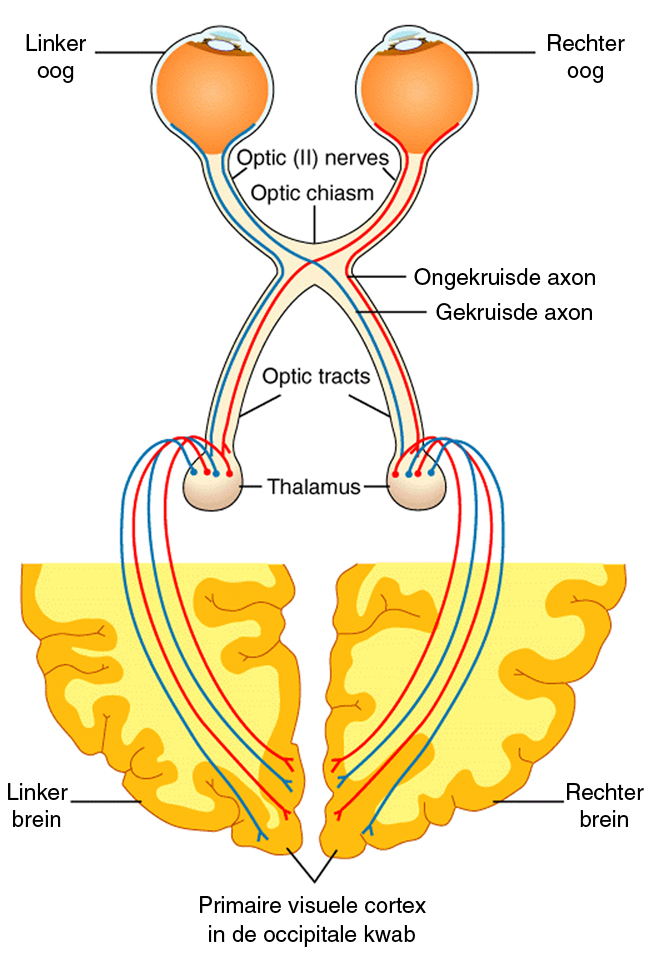 More than 90% of the neurons from the optic nerves project to the LGN in the thalamus. The other 10% of neurons go to sites responsible, for example, for visual attention (these are the superior colliculus and the pulvinar nucleus). From the LGN, a bundle of axons goes to the primary visual cortex (V1).

The right LGN processes information from the left visual field. The axons from the ipsilateral eye (same side, in this case right) project to layers 2, 3 and 5. The axons from the contralateral eye (opposite side, in this case left) project to layers 1, 4 and 6. The bottom two layers of the LGN are also called magnocellular LGN layers, because larger neurons can be found here. These neurons also receive input from the M-ganglion cells from the eye. Layers 3 through 6 receive input from the P-ganglion cells and are called the parvocellular LGN layers. Between the large six layers lies a small number of neurons. These neurons form the konio-cellular layers, and receive input from non-P-non-M cells from the eye.

As mentioned above, neurons from the LGN project primarily to the primary visual cortex. However, there are also a lot of areas outside of V1 that are involved in processing visual stimuli. These areas together are called the extrastriate cortex. There are two pathways through which visual information can be further processed after V1:

Peaking Early: the slow decline of our brains…

Amyloid-beta and Alzheimer's disease: is it time for a new hypothesis?

The Mountain in the Sea

To fast or not to fast